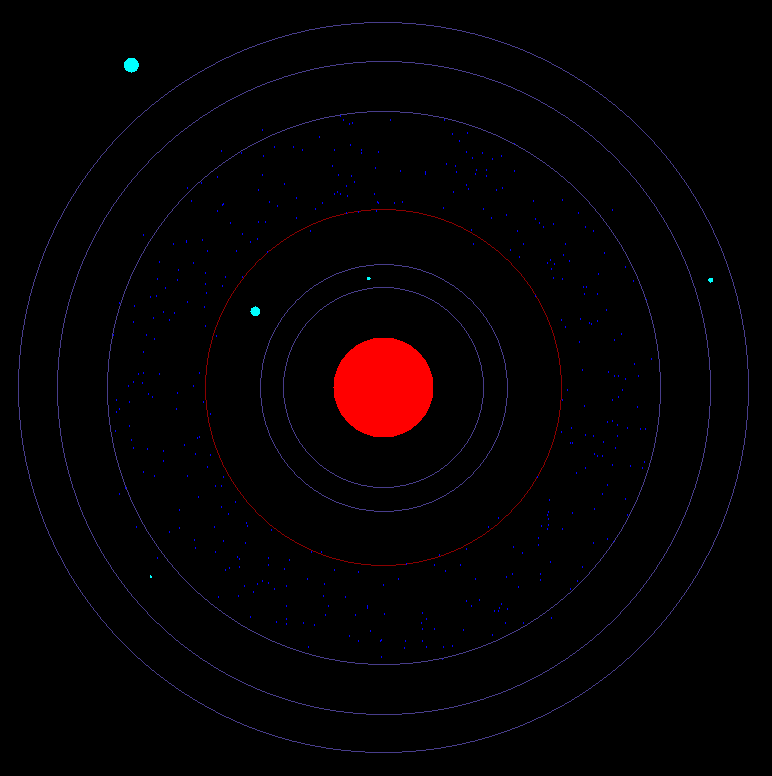 The red circle indicates the beginning of an asteroid belt. There are additional factors in place to determine the density of the asteroid population. In the game asteroids will provide significant income for those that pursue mining as a career. The dots are not asteroids, but clusters. In the game, the main map when zoomed out would appear similar to the above. But when you are zoomed in and flying around an asteroid belt you would see significantly more dots on the radar. Just be sure you've equipped a good set of deflection shields on your ship, asteroids can take a serious chunk out of a space ship if you attempt to navigate without the proper equipment.
Posted by Unknown at 5:26 PM No comments:

I intended to buy an Asus but after spending countless hours at BestBuy over the past few months looking at each laptop, typing on the keyboards and deciding what I actually needed I decided to buy a less expensive laptop.

I got a Toshiba for $599. It's powerful enough to write software but weak enough that I won't install games that will distract me from programming.

While the game lends itself very well to the touchscreen laptops, I opted not to buy one that had touch screen.

In the end I got a laptop that has a great keyboard. My typing test was to see how well I could type
private static void method(){
for(int x=0;x<1928;i++)
doSomething(i);
}

I also tested the location of the arrow keys, tab key and power button. Oddly there were a few models where the power button was so close to the delete key that I shut the unit down while testing (lenovo).

The other problem I had was that I had purchased units in the past and returned them. For some reason when you close the lid on some models (mostly Lenovo) the unit powers down instead of sleeping regardless of how you setup the power options.

I still have 12 days to return this to BestBuy but I don't think I will.

I hate buying new computers. Granted I usually build my own but I've been trying to do a lot of the programming using a Win 7 VM on VMware Fusion on an 11" MacBook Air. Bottom line, with a new laptop I will do more. So I'm about 99% sure I will be buying an Asus laptop, they seem the most solid and have a screen resolution that will actually work in creating this game.

So hopefully in a short amount of time I'll be back in to programming instead of all the different organization tasks I've been taking on that a mostly useless 11" MacBook can handle.
Posted by Unknown at 4:11 PM No comments:

I've been spending a lot of time making mind maps of the different aspects of the game that require development. It's a humbling experience when you see what you've built and what is required to be built.

With the direction in hand, now I'm able to focus attention on the areas of the game required to make it playable. While a huge emphasis has been put into the development of space travel, it's actually one of the least used systems when playing the game. So for the next couple months I will focus on the travel, financial, trade and crafting aspects of the game.

I guess I had this total epiphany when I realized that space exploration was useless without a reason to leave a planet outside the public transportation systems available.
mind map for programming tasks: 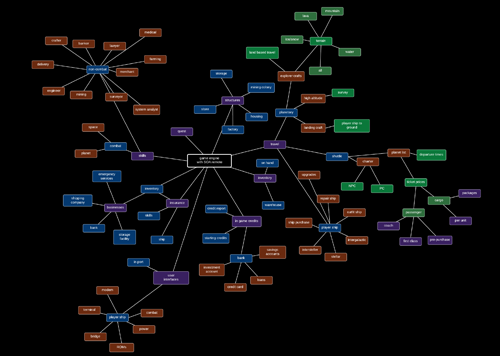 Too small to read, for some good reasons, the map above represents the core game engine in the center black box. From that are each of the main functional areas:
At this point about 15% of the boxes are completed which has created an almost playable game. So for now I can zip around the galaxies, plot waypoint, gather information about planets and fly a somewhat reliable space ship. In showing part of the game the other night my ship exploded, with warning. I forgot that my engines were heating up...
Posted by Unknown at 6:05 AM No comments: